Love That Album Episode 37 - The Zombies - Odessey and Oracle 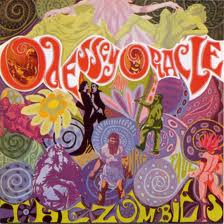 For episode 37 of Love That Album, I’m happy to welcome Simon and Brian of the truly excellent Sodajerker on Songwriting podcast (download at www.sodajerker.com)

In 1968, The Zombies were in the unfortunate position of not really having achieved the sort of success they deserved. History had been far kinder to many of their contemporaries. They decided they would record one final album (at Abbey Road, no less). It even had the ignominious misspelling of the title on the album cover – Odessey and Oracle. A year after its release, Al Kooper had released the album on CBS in the US and the band had a smash hit with the single “Time Of The Season”. This was ironic for two reasons. The obvious one was the band had split up and there was to be no promotion. The second, more subjective irony was that this song was not typical of the style of the rest of the record.

Sodajerker and I discuss the dark themes sung about on this album (war, prison, dying lonely, and that old staple, relationship heartbreak) made more palatable by glorious melodies and harmonies. This album is a bona fide classic that needs to be in every pop lover’s collection. Listen to this episode and have us convince you why.

Download the episode either from http://lovethatalbum.blogspot.com or search for "love that album" in the itunes store.

Send me any feedback at rrrkitchen@yahoo.com.au (written or mp3 voicemail) or join the Facebook group at http://www.facebook.com/groups/lovethatalbum and start a discussion on your favourite underrated bands.

Email ThisBlogThis!Share to TwitterShare to FacebookShare to Pinterest
Labels: Colin Blunstone, odessey and oracle, Rod Argent, She's Not There, Sodajerker, time of the season, zombies

Episode 81 - The Flesheaters and Cows

Episode 60 - The Livingstone Daisies & The Grapes

Episode 50 - Beneath The Planet of Shooting the Shit

Episode 41 - Son of Shooting The Shit

Episode 2 - Not quite John Hiatt

Bonus Episode - Compilation Series - Love That Album: The Compilation Edition Episode 47 - It Came From The Eighties

Bonus Episode - Compilation Series 8 - Acid Off (The Ramones & The Hellacopters)